Zachary Himelhoch is a world-percussionist with specialization in Afro-Cuban, Brazilian, and Caribbean styles. Zachary played with Bloco Maximo, a Brazilian Samba Bateria based in  Chicago, Illinois for five years and was drawn to the rhythms and energies of the music along with the community atmosphere and history of both Afro-Brazilian rhythms from Bahia and Rio’s street samba. After moving to Nashville, Tennessee, Zach formed a local Bateria to bring together the talented group of musicians known as Samba Nashville.

Andy Plank is musician and educator from northeast Wisconsin.  He studied classical and non-western percussion with Dane Maxim Richeson, where he was fortunate enough to develop an interest in Afro-Cuban and Brazilian music.  Since moving to Nashville, Andy has searched for any and all opportunities to play and study non-western percussion.  He met Zachary and is excited to be a part of Samba Nashville.

Bryan Brock is a seasoned percussionist specializing in creative applications of rhythms, instruments, and techniques from all over the globe. Recently featured in a series of videos for Meinl Percussion, his unique blend of creativity, versatility, and skill enhances a profusion of musical styles. Bryan earned his bachelor’s degree from the University of North Texas and has studied throughout America, Cuba, and Ghana with percussion masters from African, Arabic, Brazilian, Cuban, and European traditions.

Chris Moran has lived and played music in Nashville since 1984.  He performs frequently around town with groups ranging from rock and R & B wedding bands to jazz combos.  However, he is most passionate about Brazilian Music, and with some like-minded musicians started the group Choro Nashville several years ago to have a vehicle for learning and performing Brazilian Choro music.  Chris plays guitars, mandolin, cavaquinho, plus 5-string and tenor banjos. Samba Nashville gives Chris a much needed outlet for banging on things and making joyful noise.

Born in Bogotá, Colombia, Marcela Pinilla is a Latin alternative singer whose musical journey has taken her around the world. She has had the pleasure of performing in many languages and in many countries from across South America to China, Malaysia, Indonesia, Singapore, and the United States. As her passion and musical talent grew, she had the opportunity to join the band Jazz Latino and performed with the group at notable jazz festivals such as Sunrise Music Festival, the Kuala Lumpur Music Festival, and the Kuching Jazz Festival. Today, she continues her musical journey in the creative mecca, Music City USA.

Having lived in Nashville for just over two years, drummer/percussionist Danny Pratt has begun leaving his mark on the live performance and studio scenes in Music City. Pratt’s musical versatility and knowledge of music directing have allowed him to tour with an array of up-and-coming bands and artists ranging from Soul/Roots powerhouse, Kyshona Armstrong, to Indie/Alternative rocker, Jordan DePaul, and the high octane Rock & Roll outfit, The New Schematics.
After earning a BM in Jazz Studies and Percussion Performance from Northern Illinois University, Pratt began his career in Chicago as a bandleader and music educator before shifting his focus to touring and session work as a sideman in Nashville. He has provided percussion and drum set expertise on a number of recording sessions at many of Nashville’s most renowned studios including Sound Emporium, Ocean Way, and Columbia Studio A, as well as recording at Bear Creek Studio outside Seattle, WA with famed producer, Ryan Hadlock (Lumineers, Vance Joy). In addition to working as a live and studio sideman, Pratt performs and records with his Southern Rock/Americana band, Flying Buffaloes. When Danny is not in the studio or on the road, he enjoys gardening and experimenting with vegan cooking at his home in East Nashville.

Larry Seeman has studied and played jazz guitar for over 25 years, and is Development Director at the Nashville Jazz Workshop. He has had a special interest in Brazilian music for the past 15 years. He was a member of the band Samba ove (2007-2012) and is a current member of Choro Nashville. His interest in Brazilian music has led him to the cavaquinho, 7-string guitar, and assorted percussion instruments. 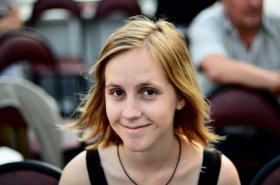 Alexa Voytek has been playing the violin for over 23 years. She has a particular interest in
various styles of Brazilian music (choro, samba, forro) as well as Appalachian old-time music. After moving to Nashville in 2014, Alexa joined the group Choro Nashville. Through participation in multiple Brazilian ensembles, Alexa challenges her classical background with the more fluid groove of Brazilian rhythm.